If you have been wadded through the internet for the next pair of tennis shoes, then you must have come across about clay court shoes vs hard court shoes, and asked yourself, aren’t tennis shoes versatile? 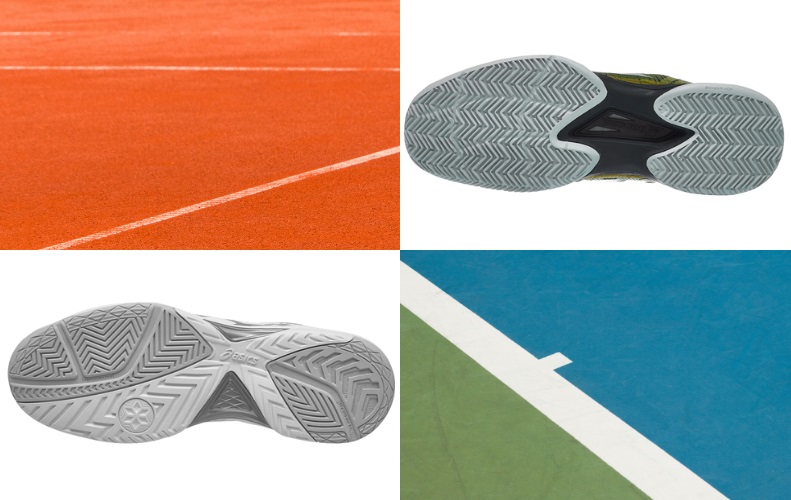 That being said, let’s jump into the details.

Since playing tennis on hard courts is a completely different game compared to the clay courts. Therefore, the tennis shoes used on the hard courts need to be much more durable than the clay courts, which are quite lenient to the shoes.

However, the sole is not the only differentiating factor between these shoe types. Thus, below we have listed all the differences between clay court shoes and hardcourt shoes. Also, we have compiled an extensive guide.

Clay courts are the slowest type of courts among hardcourts and grass courts. Thus, the clay-court shoes are designed accordingly. Claycourt shoes do not need to be as rigid as hardcourt shoes. However, they need to provide more traction and control you need on a slippery surface.

A majority of the clay-court shoes have EVA midsole with medium shock absorption capabilities. These shoes are flatter than their Harcourt counterparts, and there is not much shock absorption required on the clay courts due to the soft clay structure.

The clay-court tennis shoes have a flat sole with a herringbone or a zigzag pattern. The grip on the sole of the claycourt tennis shoes is much more dense, which provides you the traction and control on a clay court.

Hard courts are the mainstream tennis courts in the united states. These courts are immensely popular, and a majority of beginners start their tennis careers on these courts. Also, these courts are super rigid and face-paced. Thus they need tennis shoes that can withstand the hardships quite easily.

The midsole of the hardcourt tennis shoes is made out of EVA material that provides these shoes with excellent shock absorption capabilities.

Also, there is an ample amount of padding on the inner side of the shoes, which can provide cushioning during sudden jumps and maneuvering on the hard courts.

Although Clay Court tennis shoes and hard court tennis shoes might look the same, however, there is a bunch of difference between the two, as they both are manufactured to be used for different purposes.

The clay-court tennis shoes have a breathable and well-ventilated upper, with medium shock absorption capabilities, and medium reliability.

On the other hand, hardcourt tennis shoes are versatile, have excellent padding, and offer superior traction and control.