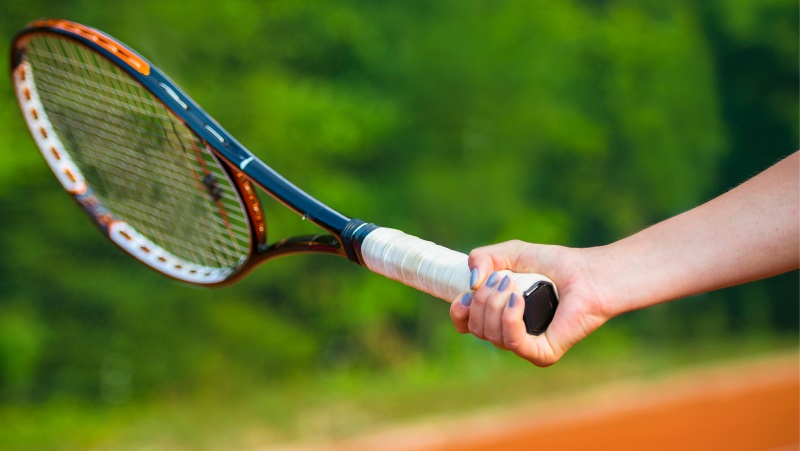 There are various tennis racket grips that are used for specific shots. The grip has an enormous effect on how the ball behaves when you hit it. Obviously, no tennis racket grip is better than the other one. It’s the choice of the player how he holds the racket and what shots does he play.

In this blog post, we will discuss the salient features of all types of tennis grip. So, it will be easier for you to go through the different types of grips and choose the one that fits your taste and playing style.

Before going into the details of the grips, you should know the essential terms.

Each side of the octagonal grip is called a bevel. They are numbered from 1 to 8.

When you hold the tennis racket perpendicular to the ground, the first bevel from the left side is the bevel number 1.

If you are a leftie, you can reverse the numbering.

In continental grip, you have to place the heel pad and the index knuckle on the bevel number 2. And place your thumb in such a way that it forms the “V” shape.

If you are a leftie, then you place your index knuckle and the heel pad on bevel number 4 and form the same “V” shape.

Since this grip provides the maximum amount of topspin, therefore, it is the grip of choice for many professional players around the globe.

This grip is very complicated and hard to master than the traditional continental grip. It’s not the way an amateur player will hold the racket.

To achieve the full western grip, place your index knuckle and the heel pad on the bevel number 5.

The semi-western grip is on a high rise due to the destructive amount of power and topspin it produces. If you can master this grip, it will provide you with a clear advantage in the game. This grip allows you to hit the ball with full power, and still, it resides in the fair play area.

Semi western is the modern-day grip and provides you a very strong grip of the ball. In fact, it’s the ideal grip for the tennis ball. If you want to dominate the game field, you have to have a stronghold on the semi-western grip.

Place your index knuckle on the bevel number 4 to have the semi-western grip.

There are various combinations you can use to apply the double-handed backhand grip. The most common and effective way of obtaining the double-handed backhand grip is to place your index knuckle and the heel pad on the bevel number 2 as you are holding the racket in the continental grip. And place your left hand on the eastern forehand grip position, higher on the racket handle.

In this double-handed grip, the right-hand plays its role just for the support purpose, and your left hand is used for playing the actual shots.

If you want to achieve the next level of game using the double-handed backhand grip, we will advise you to practice with your non-dominant hand only. In this way, the non-dominant hand will become much more efficient, and you will have better control and power attached to your shots.

The Evolution of Forehand Tennis Grip

The way you hold the racket in tennis forehand has a huge impact on the power, stability, and topspin of the shot. Thus, tennis grips play a very vital role in the game.

The continental grip is the most widely used tennis forehand grip. It is mainly used to serve and volley. The eastern forehand grip is used to hit flat shots that are more powerful.

The Evolution of Backhand Tennis Grips

Well, there is not single tennis serve grip used for the serve. There is a lot of tennis serve grips that you can use for serving a purpose. This totally depends upon the player and his choices. There are different grips used for different types of serves.

In the professional leagues, players use the eastern backhand grips for topspin serve. The server stands at an angle to the baseline and then makes the contact of the racket squarely on the ball.

The continental grip is used for the slice serve. The server tosses the ball on the front side at the width of 6 inches roughly from his right shoulder. Then he hits the ball to impart spin.

For the right-handed opponent players, the slice serves cuts to the left side, making it difficult for the opponent player to give a good reaction shot.

There are three types of topspin shots, and every kind of these shots is played with a different grip. Mostly, the topspin serve is served using the eastern backhand grip. The ball is thrown into the air, and then when it drops down to the legs area, the server hits the shot.

All the serve techniques use different tennis grips. But if you want to stick with one tennis grip for the service purpose. You can try out the continental grip. This tennis grip is versatile and can be used for almost all the different types of serves.

Tennis grips play a very crucial role in shot power and topspin. Different types of grips support various tennis shots. There cannot be a perfect grip for everyone. You should try all the tennis grips one by one for a limited time and check out what works best for you.

It’s understood that one grip is not enough for serious players. Therefore, you should try to master one grip at a time and then move on to other grips.

For the service, choose a grip that provides excellent power and topspin to the ball. We will advise you to try your hands on the continental grip.

Tell us in the comments section below, what do you think of different tennis grips and what works out best for you.

Q: What grip should I use for tennis?

Ans: There is a very important role of tennis grip in tennis serve and topspin. No grip is perfect for every person. You can check all grips one by one and then select which grip is perfect for you not rely on one grip. Just select anyone and keep practicing on it until get expertise on it then try other grips.

Q: What is the best tennis grip?

Ans: All tennis grips are important and have their role in tennis serve. You should try all of them and then select the best one for you. However, here we recommend you to select continental grip as it delivers power and topspin to the ball during service.

Q: What is the best forehand grip in tennis?

Q: What are the different tennis grips?

Ans: Below is the most popular tennis grips.

Q: What is the most common tennis grip?

Ans: The most common tennis grip is Eastern Forehand Grip. Its best for serving as it produces power and speed to your shorts. You can adapt it very easily and meanwhile easily transferable to the continental grip.

Q: What is the continental grip in tennis?

Ans: Continental grip also called hammer grip. It’s the easiest tennis grip that not only provides power to your shorts but also allows you to play a great variety of shorts. You can easily play different shorts without changing the tennis grip between the shorts.