Tennis is one of the most emerging sports in the world right now. It is played around the world, and there are four major tournaments played. A majority of beginners jump into the tennis game without knowing the tennis rules and how to play tennis game.

The reason is that there are a bunch of complexities in this game.

Therefore, we have compiled this blog post, in which we will show you how to play tennis step-by-step.

That being said, let’s jump into the details and check out how to play tennis. 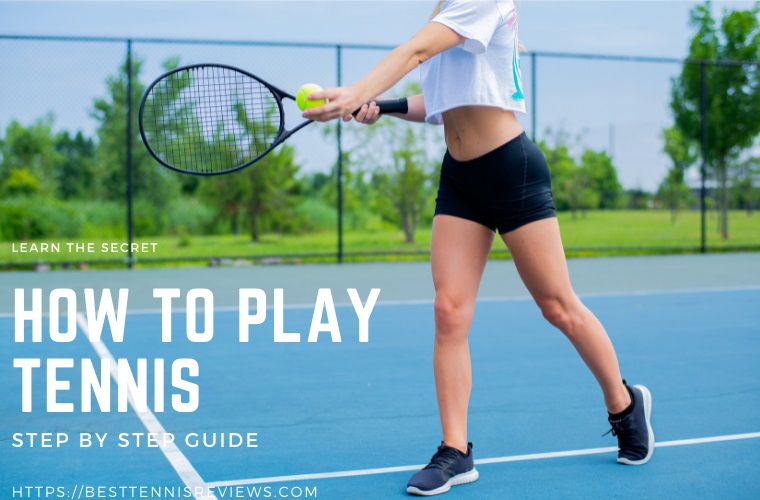 Here are the Things Required for Playing Tennis:

Don’t forget to buy the latest tennis shoes as they are an integral part of the tennis game.

A tennis match always starts with a coin toss, and the winner chooses between serving or selecting aside.

To win a point, the ball should land within the white lines, or the returner fails to return the ball, and it hit the net or directly falls outside the white line.

The server should serve from behind the baseline; otherwise, it will be called foul if he touches the baseline or crosses it during serving.

A player has two chances on serve; he can make a mistake during the first serve, like hitting the net or falling outside the service line. If he cannot deliver the second serve legally, the point will be awarded to the opposing player.

If the ball blows any part of the line, it will be considered a point and anything outside will result in a point lost.

There are three sets for women and mostly five sets for men’s matches, and each set contains six games. A player has to win a game by the margin of two or more points.e.g 6-4,6-3. In case of 6-6, the game goes to tie breaker and decided on who gets 7 points first

Per International Tennis Federation (ITF), the tennis global governing body, the court should be rectangular. The standard size of the tennis court, according to ITF regulation, is 23.77 meters long and 10.97 meters wide.

However, the width differs for singles. Only 8.23 meters of width is used for single matches. 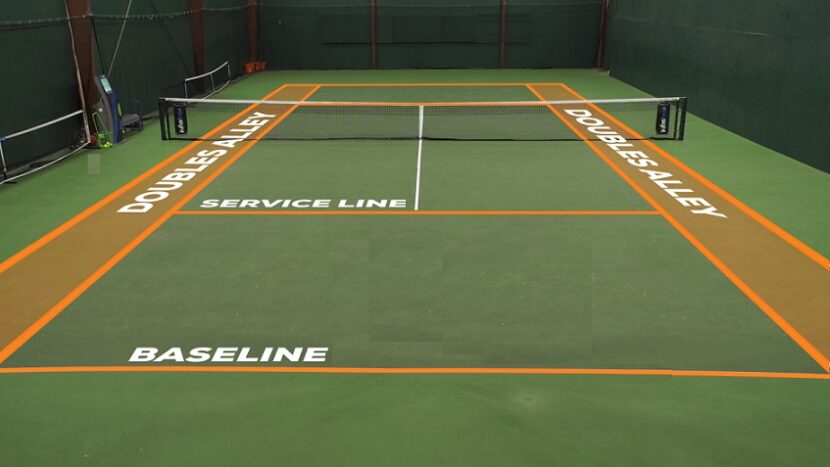 There’s a net in the center of the court parallel to the baseline, which divides the court into two halves. In each half, a service line is drawn 6.40 meters away from the net, which extends only to the singles sideline marking.

There are three primary types of courts, Grass, Clay, and Hard Courts.

Holding the Tennis Racket – (How to Play Tennis For Beginners)

Holding the tennis racket the right way is one of the key steps in tennis. Although there are various gripping techniques that are widely used in tennis, still, as a beginner, you should go with a basic one.

The continental grip is the most versatile grip in tennis.

Not only this grip is versatile and can be used for serve, volley, and other shots, but it is very convenient to master this grip type. You can also visit Tennis Grip for an advanced guide.

It’s the reason you will notice that most tennis instructors will advise you to adopt it as your first grip.

How to Hold the Tennis Racket Using the Continental Grip:

Each tennis game starts with a serve. Thus, you have to master it for enhancing your game. Below, we have provided you with the complete method for serving the ball using the continental grip towards the service area. You can check Tennis Serve for a detailed guide.

Here is How to Serve the Ball:

How to Volley – (How To Play Tennis Volley)

When the ball is hit before touching the ground, it’s called Volley. Volley is usually hit when the player gets offensive on the opponent player.

There are various methods of hitting the Volley. In this method, we will show how to volley the tennis ball.

Tennis is one of the most accepted sports in the world. It is played around the globe, and there are major tennis events held on all the continents of the world.

If you are new to tennis games and don’t know how to play tennis, we have compiled this guide specifically for you, in which we have put together all the tennis-playing rules.

If you still have any issues, tell us in the comments section below, and we would love to help you out.

What Are the Basic Rules of Tennis?

Tennis has a bunch of tennis rules, therefore the main question is how to play tennis rules? The most basic rules of tennis are to score the points over your opponent. The player with the most number of points in a set wins the game.

How to Play Tennis Alone?

Well, tennis is a multiplayer game, and you cannot play it alone. If you want to play tennis, you have to find an opponent player.

How Can I Learn Tennis Fast?

Practice, practice, and practice. If you want to learn tennis fast, you need to practice a lot. After learning the rules, you need to play them to enhance your game.

Is It Difficult to Learn Tennis?

Tennis is surely one of the most challenging sports in the world. Thus, you would need to put some effort in order to learn tennis fast. So, yes, it is difficult to learn tennis.