Tennis game has a very long history and are played on different types of tennis courts. It originated from Northern France, and then it spread out to the rest of the world. Tennis as a sport is played around the world and is immensely popular in the USA, UK, Australia, France, Germany, Croatia, and Spain. 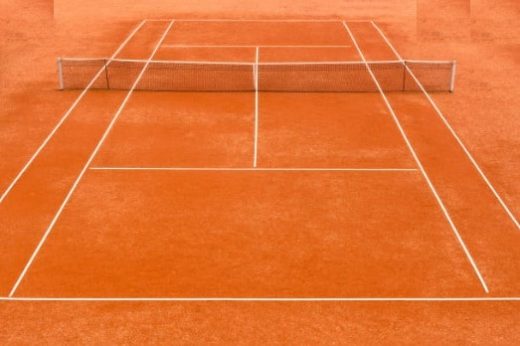 These courts are usually very cheap to install and require a very high maintenance cost than the other types of tennis courts. The gameplay is generally slow on these courts with a much higher bounce than the grass court.

There are different types of tennis courts, even in the clay-court category. These different variations are named upon the color of the court and the substance used.

These types of tennis courts are made up of bricks rather than clay. There is a deep pressing on crushed bricks in the upper surface of these courts. The color of the court varies due to the difference in the color of the bricks used.

This type of clay court does not absorb water easily and thus requires 2-3 days for the drying process. A typical example of the red clay courts is the Frick Park Clay Courts in Pittsburgh.

The famous Volvo Car Open tournament in South Carolina, United States, is played on the “Har-Tru.” These types of tennis courts are more common in the United States.

This tennis court was designed to improve the on-screen visibility for the television audience. It is virtually made up of the same substance as red clay. Then it is dyed with a blue color to give it a proper look. These types of tennis courts are more slippery than the regular tennis court.

The clay court usually supports Baseline players who like to play with the top-spin.

To play on clay court you need more stability tennis shoes because clay surface is a bit slippery. Further for more grip make sure that out sole tread pattern is full herringbone.

Upper should be ventilated and shoe tongue should be long that prevent clay particles from entering into your shoes. 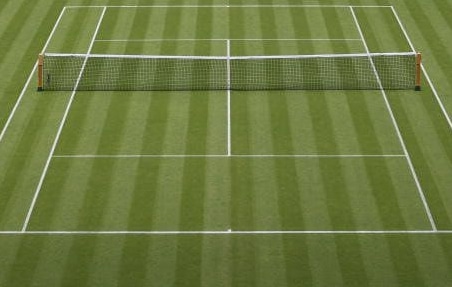 Grass tennis courts are made up of different compositions of glass and deep care to provide excellent playing conditions. Due to all these requirements, these courts are now only used in professional tennis games.

Glass courts are usually very slippery and support fast gameplay with a low bounce of the ball. In these courts, the ball rarely rises higher than the knee level. The grass-court favors players that are fast and powerful. So, a player with a “volley style” is more successful in the grass court.

As mentioned above, the glass courts have a low bounce and high pace game. The bounce of the tennis ball depends upon the quality of the grass. How long before the game the grass has been mowed and the wear and tear on the grass.

The historically popular tournaments in which grass ground was used are the US Open and Australian Open. These events used to have glass courts, but now they have shifted towards other court types. The most prestigious event in the history of tennis Wimbledon uses grass courts.

Roger Federer and Pete Sampras are considered the best players for the grass tennis courts.

Grass court is a naturally soft surface therefore you can compromise on shoe cushioning.

To play on grass court again you need stability tennis shoes because surface is a more slippery. But for grip make sure that out sole tread pattern is nub pattern that not only provide you proper grip but also protect grass from damaging. 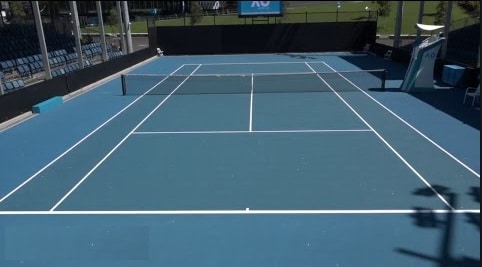 Hard courts are made up of different materials with a topping of acrylic material. These types of tennis courts offer the best value between speed and bounce and have a rising trend too.

The typical materials used in the manufacturing of hard courts are asphalt and concrete. The bounce of the ball depends upon the surface material used.

The International Tennis Federation (ITF) considers the hard courts as the best option for playing tennis. The reason for being the best court is the perfect balance between speed and play. Although, the hard acrylic courts have an advantage of a perfect combo of speed and bounce.

The ITF termed the hardcourt as the “Democratic Court.” As it favors all types of tennis players alike.

There is a minor problem with the hard courts as the hardcourt is made up of strong materials. It has a very harsh impact on the human body, and there are chances of muscle fatigue. To counter this issue, there are two variations of the hard courts used in tennis.

Both these surfaces have been in use for a long time now. The acrylic surface uses asphalt as the base material and then a coating of another material. The manufacturers have manufactured synthetic hard courts that are formed as a result of different materials like latex, rubber, and plastic. These courts have shock-absorbing capabilities and thus can highly decrease the chances of injury.

Synthetic tennis courts are on the rise due to their versatility. It’s the reason you will see the Synthetic Hardcourts everywhere. From the White House to the Sony Ericson Open tournament to the High School Tennis Leagues.

The hardcourts support various playing styles ranging from the Volley to the Baseline players.

Hard court is a rigid surface therefore you need a durable tennis shoes as wear and tear is more on hard court.

To play on hard court you need more cushioning in midsole that protect your feet from the hardness of the surface. For strong grip make sure that out sole tread pattern is modified herringbone that provide you proper grip during each movement of your tennis game. 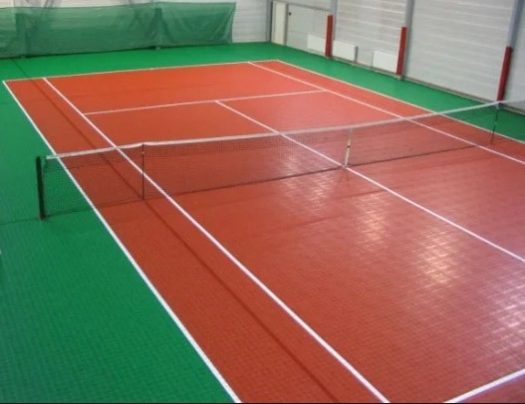 Carpet in terms of tennis refers to anything that can be removed from the surface. The carpet courts have an outer surface made up of artificial turf or hard rubber, which means that the characteristics of the ground can vary heavily by the change of the surface.

The carpet courts have been banned by the Association of Tennis Professionals (ATP) since 2009. Therefore, these courts have very low to no significance in the modern era of tennis.

There are two types of carpet tennis courts.

The artificial turf carpet has a coating of turf on the surface of the sand. This type of tennis ground became very popular in the 1980s. These tennis courts were heavily used by the British and Asian Tennis Clubs due to their low maintenance cost than the grass courts.

The Association of Tennis Professionals banned the use of carpet courts in tennis in 2009 from all men’s tournaments. The reason stated for the ban of the carpet tennis court was the safety of the players. The ATP had concerns about the injury of players in the carpet courts.

Many players from around the globe criticized this decision. These players had a stance that the spectators of the tennis should have the luxury of enjoying tennis speculation on the different types of tennis courts.

The only tournament that was played on the carpet tennis courts until recent years was the Tournoi de Québec, which ended back in 2018.

There are no international tournaments played on the carpet courts anymore.

If we summarise the whole topic then simply we can say that mainly there would be Grass court, Hard Court and Clay Courts. Each Tennis court has its own characteristics and behavior. So choose the one which suits your playing style and keeps you more comfortable while playing tennis.

Q: What are the 4 types of tennis courts?

Ans: Below is the 4 popular tennis courts.

Q: What is the difference between clay and grass tennis courts?

On the other hand, grass court is made up of Grass and can be slippery at times. It is also known as a Lawn Tennis court. It produces high speed and low bounce effects. Therefore volley-style players are more successful on these courts.

Q: What’s the difference between clay courts and hard courts?

Ans: Clay courts are made with crushed bricks, stones, and natural clay. They are usually slower tennis courts and produce low speed and higher bounce. Baseline players are more successful on these courts.

Hard courts are the most commonly used tennis courts. They are made with cement or any other rigid material. They produce moderate speed and bounce. Therefore, a tennis game is easier to play on a hard court as compared to a Clay court.

Q: What is the best type of tennis court?

Ans: Each tennis court has its own properties. Like Grass court is best for serve and volley style and clay court is helpful for defenders or baseline players. Meanwhile, a hard tennis court has moderate speed and bounce. Therefore, it depends upon which playing style you have and choose the tennis court according to that.

Q: How high is a tennis court net?

Q: What is a carpet tennis court?

Ans: Carpet tennis courts are made with textile woven or non-woven nylon sheets or with rubber material sheets. These are the fastest tennis courts and are removable. The Association of Tennis Federation has banned tennis on carpet courts because of the safety of the players.

Q: Why is Nadal so good on clay?

Ans: Clay court produces high bounce and reduces ball speed. While Nadal is an expert in his forehand grip as compared to his backhand grip. So with high bounce and slow speed, he produces great topspin and gives his opponent a tuff time.